This example converts an SVG file into PNG:

This renders the following image:

(This example is included as synopsis.pl in the distribution. The input and output files are also included.)

This module renders SVG ("Scalable Vector Graphics") instructions into a Cairo surface. The user can then choose what to do with the surface, for example write it out to a PNG file.

Arguments are as follows

The user can supply a Cairo surface:

The user can also supply a Cairo context:

If a Cairo context and a surface are both supplied, the value of surface is ignored, a warning is printed, and the image is drawn using only the context value.

For simple drawing tasks, we recommend using the default surface generated by this module, which is the return value from "render". Only supply a surface if the module gets the dimensions of your image wrong. Only use a Cairo context if you want to include the image in some other image or rescale it. See "Scaling the output" for an example.

Draw an SVG file or scalar into a Cairo surface. The return value is the surface drawn into. If the call value is a scalar containing what looks like XML, it is parsed from the scalar instead. This method guesses whether its argument is a file or a scalar by looking for a pair of angle brackets (<>) in its first argument. If it does not find angle brackets, it assumes the argument is a file name.

Calling with a scalar containing XML was added in version 0.08.

This example shows how to scale the output image using Cairo commands. 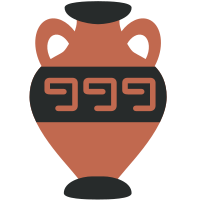 (This example is included as scale.pl in the distribution. The original image is part of the Twitter Emoji collection, 1f3fa.svg, representing U+1F3FA AMPHORA. This illustration is used under the terms of CC-BY 4.0)

The drawing methods of the module are as follows.

Draw the circle specified by the SVG attributes in %attr into the surface of $cairosvg.

Draw the ellipse specified by the SVG attributes in %attr into the surface of $cairosvg.

Render the line specified by the SVG attributes in %attr into the surface specified by $cairosvg. Given SVG input of the form <line >, this renders it onto the Cairo surface.

Given an SVG path element, send its attribute key / value pairs as %attr to render into the Cairo surface of $cairosvg. This uses Image::SVG::Path to parse the "d" attibute of the path.

Draw the polygon specified by the points attribute of %attr, closing the path.

Similar to "polygon" except that it doesn't close the path.

Process a <use> SVG element. It relies on $cairosvg already having processed the XML file in order to find the used element.

Draw the rectangle specified by %attr into the surface contained in $cairosvg.

This module depends on the following other modules.

Cairo is used for rendering the image.

Carp is used for reporting errors.

Image::SVG::Path is used for parsing the "path" information of the SVG, see "path".

This is used for the value of pi, and for various functions related to drawing arcs, and for converting angles between radians (used by Cairo) and degrees (used by SVG).

This demonstration website shows the output of Image::CairoSVG on the Super Tiny Icons collection, the Twitter Emoji Collection, and the SVG Test Suite (very limited support as yet).

Please see "BUGS" below for notable errors in the rendering.

I've written some blog articles about extending the SVG support in this module.

Trying to get SVG right

This was the first article, where I had discovered that the module's arc-drawing code and arc-parsing code was not working.

This illustrates some of the improvements made up to version 0.16, such as addition of opacity, support for the <use> tag, and more correct drawing of circular arcs.

This documents visually the rendering improvements between version 0.17 and version 0.18.

For and against muddling booleans

This documents an error caused by testing attributes directly, when an attribute with value "zero" was ignored, causing a rendering error.

CairoSVG is a Python SVG renderer in Cairo. The elliptical arc drawing part of Image::CairoSVG is a translation of its code into Perl.

Other CPAN modules related to SVG

Perl extension for a Gnome library called librsvg which converts SVG to PNG or JPEG, etc. We have not tested this library.

Does SVG to PNG conversion.

This is a specialised module for reading the "d" attribute of SVG paths.

Read the "transform" attribute of an SVG element. It is not a dependency of this module, but I used this as a reference when writing the transform code in this module.

This extends the Marpa::R2 parser to parse SVG.

This is for generating SVG documents.

Parse the XML for SVG files. It can use either XML::Parser or XML::SAX but XML::Parser seems not to work. See https://rt.cpan.org/Ticket/Display.html?id=136404.

Rasterize SVG content to pixel graphics. We couldn't get this to produce output. See https://rt.cpan.org/Ticket/Display.html?id=136405.

This might be useful if you want to do something with the PNG output of Cairo other than just write it to a file, for example adding text to it.

The Cairo CPAN module is mostly undocumented. This Perl Cairo tutorial may be useful if you need to go beyond defaults.

Various parts of the SVG standard are not implemented, as follows.

If viewing the HTML version of this page, the illustrations below each bug description demonstrate instances from the Super Tiny Icons collection where the bug causes a rendering problem. See "Demonstration website and blog articles" above.

Default fill is incorrect in some cases

Default fill is not handled correctly.

Linear and radial gradients are supported since version 0.22, but there are some remaining issues.

Shadows are not supported.

Styles are not supported very well.

Text rendering is not supported.

Currently only pixels, millimetres, inches, and percentages are supported.

The conversion ratios are one millimetre is 25.4 inches, and one inch is 96 pixels.

This package and associated files are copyright (C) 2014-2021 Ben Bullock.

You can use, copy, modify and redistribute this package and associated files under the Perl Artistic Licence or the GNU General Public Licence.

To install Image::CairoSVG, copy and paste the appropriate command in to your terminal.