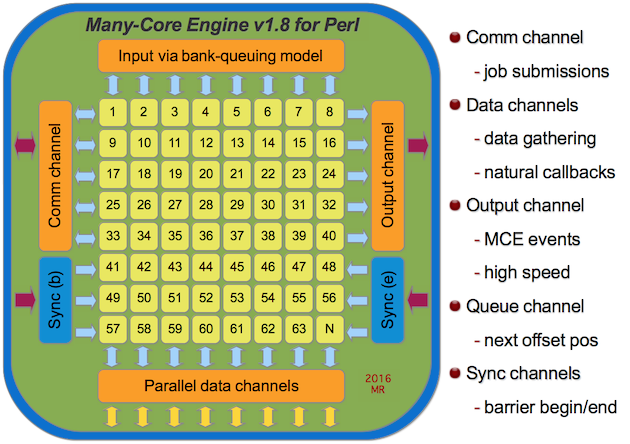 MCE spawns a pool of workers and therefore does not fork a new process per each element of data. Instead, MCE follows a bank queuing model. Imagine the line being the data and bank-tellers the parallel workers. MCE enhances that model by adding the ability to chunk the next n elements from the input stream to the next available worker. 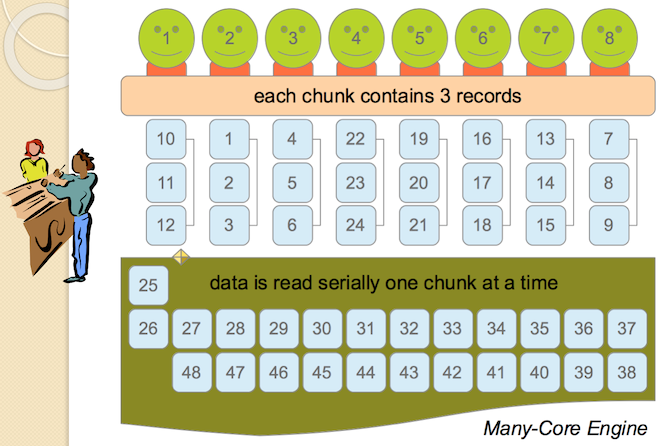 This is a simplistic use case of MCE running with 5 workers.

The following is a demonstration for parsing a huge log file in parallel.

The next demonstration loops through a sequence of numbers with MCE::Flow.

Four modules make up the core engine for MCE.

Provides a simple semaphore implementation supporting threads and processes. Two implementations are provided; one via pipes or socket depending on the platform and the other using Fcntl.

There are 5 add-on modules for use with MCE.

Provides a collection of sugar methods and output iterators for preserving output order.

Also introduced in MCE 1.839, provides a threads-like parallelization module that is compatible with Perl 5.8. It is a fork of MCE::Hobo. The difference is using a common MCE::Channel object when yielding and joining.

Provides a hybrid queuing implementation for MCE supporting normal queues and priority queues from a single module. MCE::Queue exchanges data via the core engine to enable queuing to work for both children (spawned from fork) and threads.

Provides workers the ability to receive and pass information orderly with zero involvement by the manager process. This module is loaded automatically by MCE when specifying the init_relay MCE option.

The MCE models are sugar syntax on top of the MCE::Core API. Two MCE options (chunk_size and max_workers) are configured automatically. Moreover, spawning workers and later shutdown occur transparently behind the scene.

Choosing a MCE Model largely depends on the application. It all boils down to how much automation you need MCE to handle transparently. Or if you prefer, constructing the MCE object and running using the core MCE API is fine too.

Provides a parallel for loop implementation.

Like MCE::Loop, but with support for multiple pools of workers. The pool of workers are configured transparently via the MCE user_tasks option.

Like MCE::Flow, but adds a MCE::Queue object between each pool of workers. This model, introduced in 1.506, allows one to pass data forward (left to right) from one sub-task into another with little effort.

This provides an efficient parallel implementation for chaining multiple maps and greps transparently. Like MCE::Flow and MCE::Step, it too supports multiple pools of workers. The distinction is that MCE::Stream passes data from right to left and done for you transparently.

Miscellaneous additions included with the distribution.

Describes various demonstrations for MCE including a Monte Carlo simulation.

Perl 5.8.0 or later. PDL::IO::Storable is required in scripts running PDL.

The source, cookbook, and examples are hosted at GitHub.

Refer to the MCE::Core documentation where the API is described.

MCE::Shared provides data sharing capabilities for MCE. It includes MCE::Hobo for running code asynchronously with the IPC handled by the shared-manager process.

MCE is released under the same license as Perl.

To install MCE, simply copy and paste either of the commands in to your terminal