This module aims at a transparent test suite for the DBI API to be used from both sides of the API (DBI and DBD) to check if the provided functionality is working and complete.

You may distribute this module under the terms of either the GNU General Public License or the Artistic License, as specified in the Perl README file.

Recent changes can be (re)viewed in the public GIT repository at GitHub https://github.com/perl5-dbi/DBI-Test Feel free to fork and/or clone your own copy:

We share our thoughts on the following public channels:

Though this module should validate against itself, its use is only visible when used as subset of the testsuite for DBI or a DBD.

This module is a team-effort. The current team members are

Some background and plans

Several of use DBI/DBD developers were playing with an idea for a long time to come to a new way of testing DBI and DBD and especially the API as defined by the DBI.

We have noticed in several occasions that the DBI defines the API, where testing the API is hard because there is not (yet) an actual database on the backend (no functional DBD) and from the other side (the DBD) some of these tests are quite the same, just to test if the API as documented from the DBI is working as expected from the DBD point of view.

The plan has grown to create a new module that would replace the API tests in the DBI test suite and that can also be used without modification in the DBD test suites.

This way we can assure that all documented API is tested the same way from both sides. As a bonus, we can have the DBD check that ALL DBI functionality is implemented (or documented not to be) and that all functionality (like logging) are dealt with in the way the end-user is expecting the DBI/DBD to work.

As the Lancaster Consensus has come to the conclusion that the new toolchain can expect a minimum of perl-5.8.1 (which might be raised to 5.8.4 when the need arises), we have set the lower bound for DBI::Test to be 5.8.1, which includes the use of recent Test::More and the use of done_testing(); (no plans).

What the end-user sees: 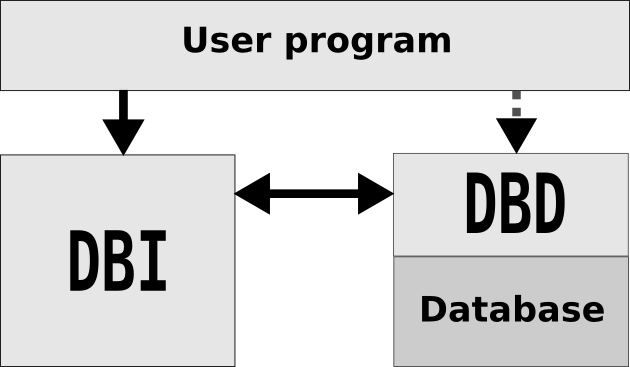 How that is currently tested:

What the new plan would be: 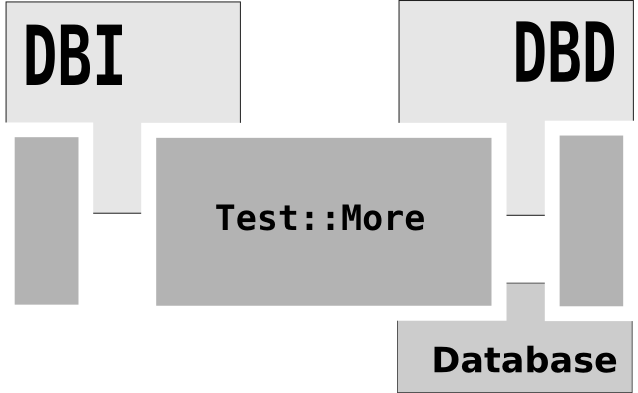 The plan is to support a full matrix of tests, including both DBI/XS and pure-perl DBI, as well as with and without proxy or other optional parts.

Visit the sandbox in the repository to view unrelated notes and stuff that won't be part of the distribution.