This is a Plack-compatible blogging platform written using RapidApp. This module was first released during The Perl Conference 2017 in Washington D.C. where a talk/demo was given on the platform: 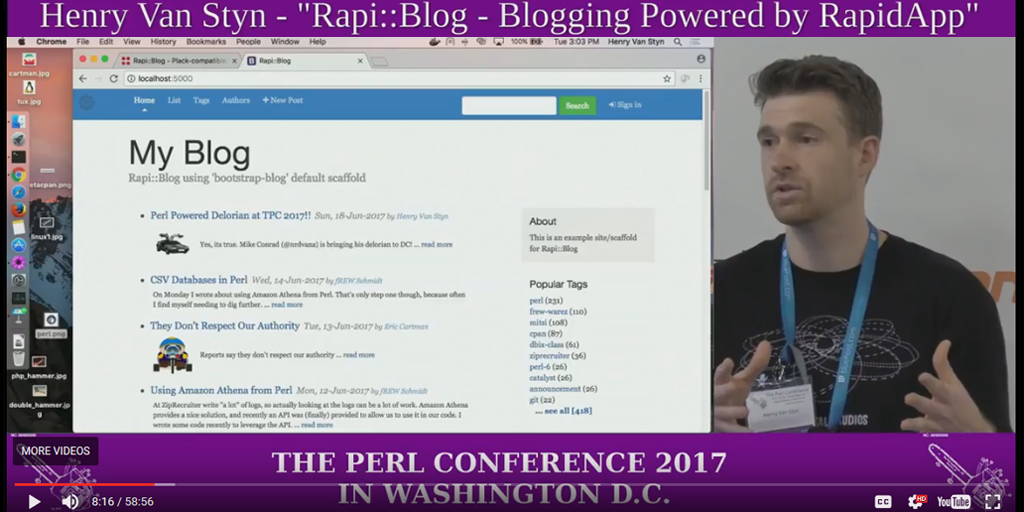 Rapi::Blog extends RapidApp::Builder and supports all of its options, as well as the following params specific to this module:

Only required param - path to the directory containing the site.

Path to the directory containing the "scaffold" of the site. This is like a document root with some extra functionality.

If not supplied, defaults to 'scaffold/' within the site_path directory.

Alternative to scaffold_path, the name of one of the builtin skeleton scaffolds to use as the live scaffold. This is mainly useful for dev and content-only testing. As of version 1.0000) there are two built-in scaffolds:

This is the default out-of-the-box scaffold which is based on the "Blog" example from the Twitter Bootstrap HTML/CSS framework (v3.3.7): http://getbootstrap.com/examples/blog/. This mainly exists to serve as a useful reference implementation of the basic features/directives provided by the Template API.

Based on the "Keep It Simple" website template by http://www.Styleshout.com

If set to true and the local scaffold directory doesn't exist, the default builtin skeleton scaffold 'bootstrap-blog' will be used instead. Useful for testing and content-only scenarios.

If this option is not supplied, E-Mails will be sent via the localhost using sendmail via the default Email::Sender::Transport::Sendmail options.

If set, all e-mails generated by the system will be sent to the specified address instead of normal recipients.

Optional HashRef config to enable Google reCAPTCHA v2 validation on supported forms. An account and API key pair must be setup with Google first. This config supports the following params:

Optional URL to use when performing the actual reCAPCTHA validation with Google. Defaults to https://www.google.com/recaptcha/api/siteverify which should probably never need to be changed.

Optional mode (turned off by default) which can be enabled to tighten the enforcement reCAPTCHA, requiring it in all locations which is is setup on the server side, regardless of whether or not the client form is actually prompting the user with the appropriate reCAPTCHA "I am not a robot" checkbox dialog. In those cases of client-side forms not properly setup, they will never be able to submit because they will always fail reCAPTCHA validation.

When this mode is off (the default) reCAPTCHA validation is only performed when both the client and the server are properly setup. The downside of this is that it leaves open the scenario of a spammer direct posting to the server instead of using the actual form. Whether or not this mode should be used should be based on need -- if spammers exploit this, turn it on. Otherwise, it is best to leave it off as it turning it on has the potential to make the site less resilient and reliable.

This param accepts only 2 possible values: 1 (enabled) or 0 (disabled, which is the default).

This software is copyright (c) 2017 by IntelliTree Solutions llc.

This is free software; you can redistribute it and/or modify it under the same terms as the Perl 5 programming language system itself.

To install Rapi::Blog, copy and paste the appropriate command in to your terminal.